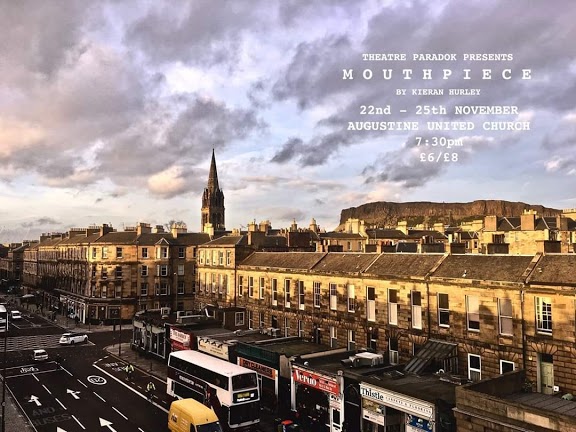 For an insight into directing as a student, I spoke with Angus Gavan McHarg, 4th year Geography student and director of last term’s sell-out production Mouthpiece. Mcharg had Alice Jackson on hand as producer, with assistants Jasmin Antonia and Aude NB, Calum Scouller playing Declan and Nicola Alexander as Libby. The show boasted original score from Duncan Gallagher and projection and tech work from Robbie Phipps and George Manchester, whilst Matthew Marsland managed the stage. It was, in my opinion, a show that went beyond just student theatre, and boasted talent throughout. Angus has shed the light on directing with Paradok, negotiating delicate scenes and the technicalities of getting a show to the stage.

How did you feel the week after mouthpiece wrapped up?

Strange. I’d never directed a show before but had heard about the“post-show blues” which I’d never got as an actor.
I was always still riding the fun wave of the show. I had this two/three day down in the dumps period thinking what am I going to do now? Because you think about it every day for four months you know. But after those few days and looking back on it on and how good it was, it was worth it. It’s nice now. I still bump into Calum every week and we get to have a catch-up.

Mouthpiece is back in the Traverse theatre from the 6th-15th February, with tickets ranging from £5-£15, and is also taking part in the £1 ticket scheme.